Seven of Our Nine Democratic Candidates Win Seats in the 2022 General Election!

Congresswoman Jennifer Wexton was elected to her third term in the U.S. House of Representatives with vote shares of 56.3% in Manassas and 60.5% in Manassas Park.

In Manassas Park, incumbent Democratic council members Alanna Mensing and Haseeb Javed were both elected to their second terms on the Governing Body with the highest- and second-highest vote tallies for the three available seats.

In the race for three seats on the Manassas City School Board, two of our endorsed Democrats, incumbents Lisa Stevens and Jill Spall, were elected as the first-place and third-place finishers, respectively. Our third endorsed candidate, 23-year-old Alex Iqbal, who had served admirably as an appointed school board member since January 2022, regrettably did not win election, but we are confident of Alex’s bright future.

We congratulate our seven successful candidates and deeply thank the scores of campaign volunteers who helped us reach out repeatedly to many thousands of voters in our two cities. Our 2023 campaigns for state senator, state delegate, sheriff, commonwealth’s attorney, and clerk of the court will soon be underway.

The Manassas & Manassas Park Cities Democratic Committee typically holds monthly membership meetings on the third Wednesday of each month, from 7-8:30 pm.  All Democrats are welcome at all of our meetings.

After meeting only virtually via Zoom during the height of the COVID pandemic, MMPCDC resumed meeting in-person in mid-2021 on the third Wednesday of each month from 7:00-8:30 pm, at the “Social Soiree” event center, 8270 Shoppers Square, Manassas, VA 20111 .  Our in-person meetings now offer a Zoom attendance option.

Attendees more than two years ago at our January 15, 2020 Reorganization Meeting

The Manassas & Manassas Park Cities Democratic Committee held its biennial reorganization meeting virtually on Zoom on Wednesday, January 19, 2022.   Seventy-two members were elected to the Committee at this initial meeting.

Congratulations to the following individuals who were unanimously elected as Committee officers for the 2022-2023 biennium:

MMPCDC extends its sincere appreciation to Mike Freeland, our outgoing co-chair, who has served us in that capacity for the past six years and had previously served as vice chair  Fortunately, Mike will continue to be part of our Leadership Team as our immediate past co-chair.

On December 28, 2021, the Supreme Court of Virginia unanimously approved three sets of final legislative district maps in the aftermath of the 2020 US Census.

Manassas and Manassas Park will be united within a new 10th Congressional District, 30th Virginia Senate District, and 20th House of Delegates District.

The new legislative district maps for Manassas and Manassas Park are displayed below. 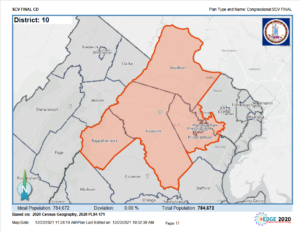 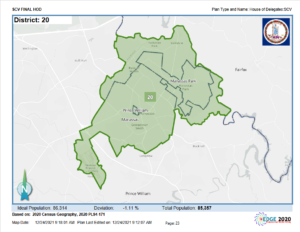 The outcome of the November 2021 “red wave” General Election was heartbreaking for Democrats at the statewide level.. Not only did the Republican candidates for governor, lieutenant governor, and attorney general narrowly sweep the statewide contests–with statewide vote shares ranging between 50.36% and 50.71%–the Republicans regained majority control of the Virginia House of Delegates, by picking up seven seats from Democratic incumbents, two of whom lost by fewer than 300 votes.

Nevertheless, the Cities of Manassas and Manassas Park both continued to vote blue, and Democrats won all eight House of Delegate seats that represent various parts of Prince William County.

Manassas voters supported our three statewide Democratic candidates (Terry McAuliffe for governor, Hala Ayala for lieutenant governor, and Mark Herring for attorney general) by majorities of 54.4% to 55.5% and also helped elect Democratic first-time candidate Michelle Maldonado to the District 50 seat in the Virginia House of Delegates with more than 55.9% of the Manassas vote.

Manassas Park voters supported our statewide Democratic ticket with majorities of 60.0% to 61.7% and helped re-elect Democratic Delegate Danica Roem to her third term in the Virginia House of Delegates (District 13) with 62.2% of the Manassas Park vote.

Beginning in 2017, the City of Manassas has a sixth voting precinct, with its polling place at George C Round Elementary School at 10100 Hastings Drive.  At the same time, the boundaries of the City’s five other voting precincts have been adjusted, to better balance the number of registered voters within each precinct.  These changes were prompted by continued residential development and population growth within the City and the requirement under the Code of Virginia that no precinct have more than 5,000 registered voters or 4,000 votes cast in a presidential election.

On February 13, 2017, the Manassas City Council adopted a new City of Manassas voting precinct ordinance that sets the boundaries and designates the polling places for all voting precincts (including the central absentee voting precinct in the Old Town Hall building at 9025 Center St).

Below is a map of the new voting precinct boundaries. In Spring 2017, the Manassas Voter Registrar’s Office mailed a voter registration letter to all voters registered in the City to inform them of their polling location.

Also in 2017, the City of Manassas has begun using the OpenElect Voting System from Unisyn Voting Solutions to scan and record votes made on paper ballots. Voters now mark their votes on a paper ballot and then insert the ballot into an optical scanner that reads the selections and takes a digital image of the ballot. After the polls close, poll workers run a tally report on the scanner to obtain the precinct results.

Thanks to the Manassas Voter Registration Office, one of the new voting machines was demonstrated at our March 6, 2017 Manassas & Manassas Park Cities Democratic Committee meeting.

Has Your Voter Registration Been Purged?

Every two years, the Virginia Department of Elections removes inactive voters from the voter registration rolls of every Virginia locality.

Reportedly, a voter’s registration is purged only after an inactive voter fails to respond to repeated mailers from the Virginia Department of Elections requesting an address verification and then fails to vote at all during two Federal Election Cycles following the initial mailer.

You might want to check if your name is on one of the four lists linked above.

The best and easiest way to verify that your voter registration is still valid is to review your voter record at the Virginia Department of Elections voter portal, after entering your name, date of birth, locality, and last four digits of your social security number.

Paul Reid, a stalwart member of our Committee and a good friend to many of us, passed away on Thursday, February 23, following a bout with cancer.  He died at home in his wife’s arms.

Paul was born April 13, 1951 in Brooklyn, New York, the son of the late William F. and Marcella M. Reid.  He retired from the Central Intelligence Agency, then worked for General Dynamics and Geospatial Solution Inc., finally retiring in 2015.

Paul Reid was the true embodiment of Democratic values. He believed in equality and justice and was dedicated to making this country live up to its ideals. He was a quiet man, except when talking about the craziness exhibited by the other side. No one worked harder and longer than Paul. He knocked doors, made phone calls, worked the polls and was always the first one onsite to help set up for events. He was given MMPCDC’s second Blue Victory Chair’s Award for his service and commitment to getting Democrats elected.

Paul spoke fluent Spanish and loved to dance the salsa with his wife Betsy. At our festival booths, it was reassuring to have him there to converse with our Spanish-speaking visitors.

After the House of Delegate Districts were redrawn, and we could not find anyone to run against Jackson Miller, Paul even agreed to be our write-in candidate for the 50th District Delegate. We called and handed out write-in ballots, and he received a good vote showing.

Paul was generous. He often offered to assist with financing events, and he sponsored tickets to our events, so the less fortunate could attend. He gave to Democratic candidates and then continued to give his time and energy to getting them elected.

Paul Reid was a participant. Paul was a soldier in the fight to turn Virginia Blue. And recent past elections have shown the rewards of that battle.

When his widow was asked what can we do, she responded simply, “Take back Congress.”  Nothing would please him more.

Paul also volunteered as the Vice President of in-line hockey for the Prince William Hockey Club from 1998 to 2006, where he also coached two of his sons, Andrew and John.  In 2006, he purchased a second home in Capon Bridge, West Virginia, where he spent the weekends experimenting with home brewing recipes, reading, kayaking, fishing, biking.