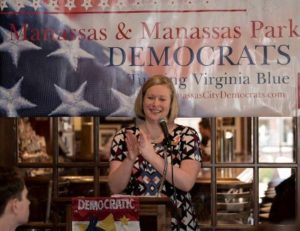 This victory belongs to everyone who knocked doors, called voters, and/or greeted voters at the polls on behalf of Jackie’s campaign.  Although Jackson Miller received more votes than Jackie did within the City of Manassas, our work in Manassas and Manassas Park reduced Miller’s vote margins on his home turf, thereby contributing to Jackie’s victory.  The fact that Jackson Miller’s campaign outspent Jackie Smith’s campaign by at least six to one makes Jackie’s election victory all the more remarkable.

Our best wishes to our new Clerk of the Court, Jacqueline Smith!

Next post: Democratic Nomination Process for 2017 City Elections for Commissioner of the Revenue and Treasurer