Democrats Win 9 out of 10 Manassas and Manassas Park Elections in 2018!

November 6, 2018 was another banner day for Manassas and Manassas Park Democrats, as 6 of our 7 Democratic nominees and all 3 of our endorsed candidates for the Manassas School Board won their elections to public office.

In Manassas Park, first-time candidates Alanna Mensing (D) and Haseeb Javed (D) were both elected to the City Council with 2,738 votes and 2,042 votes, respectively.  Incumbent Preston Banks, a Republican running as an Independent, was also elected with 2,392 votes, while incumbent Michael Carrera, another Republican running as an Independent, placed fourth and was thus not re-elected.

Elsewhere in Virginia, Democratic women won two additional seats in the U.S. House of Representatives from Republican incumbents.  Elaine Luria won CD-2 from first-term Republican Scott Taylor with 51% of the vote, and Abigail Spanberger won CD-7 from second-term Republican Dave Brat with 50.3% of the vote. 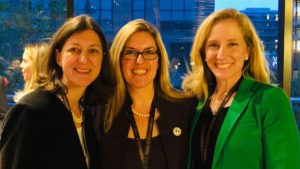 Nationally, the Democratic Party picked up a net of 40 (and possibly 41) seats in the U.S. House of Representatives (the largest Democratic gain in a mid-term House election since 1974), producing a 235-199 Democratic House majority.

Although the U.S. Senate Democratic caucus lost a net of two seats, resulting in a 53-47 Republican majority, only 9 of the 35 Senate seats contested in 2018 (<26%) had been held by Republicans, whereas the Democrats were faced with defending 10 seats in states that Donald Trump had won in 2016 and retained six of them. In light of that unfavorable Senate map (the most unfavorable for Democrats in a midterm since at least 1914), the net loss of only two Democratic seats confirms the 2018 Blue Wave and places the Democrats on a path to regain control of the U.S, Senate in 2020 when about 64% of the contested seats will be Republican held.

Official election results for the City of Manassas

Official election results for the City of Manassas Park