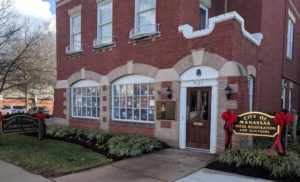 On Tuesday, November 3, 2020, Manassas and Manassas Park voters will help elect a U.S. President and Vice President, a U.S. Senator, and a member of the U.S. House of Representatives.  In addition, the voters in each city will elect a mayor and three City Council members for their city, and City of Manassas voters will also elect four School Board members.

Ensure that you can vote at your regular polling place on Election Day or, if you qualify, vote earlier by absentee ballot or no-excuse in-person early voting.

If you have not yet registered to vote in Virginia or if you need to update your address, you must fill out the Virginia Voter Registration Application. You have the following registration options:

For the November 3, 2020 General Election, the deadline to register to vote or change your address is Tuesday, October 13, 2020.

• A United States citizen
• A resident of Virginia
• 18 years old by the next general election (17-year-olds who will turn 18 by the next general election may register in advance and may vote in the primary, if any)
• If you have been convicted of a felony or judged to be mentally incapacitated, you must have your rights restored before registering to vote. Visit the website of the Secretary of the Commonwealth for information on the rights restoration process.

During the 2020 General Assembly session, the new Democratic majorities in the House of Delegates and the Virginia Senate expanded the right of vote significantly.  Almost 70 election law bills were passed and signed into law by the Governor, the majority of which will take effect on July 1st, including:

Additional election reforms will take effect in 2021 or later or are pending reenactment in 2021.

Absentee Vote in Person or by Using Ballot-By-Mail

Registered Virginia voters no longer need to state an excuse to vote absentee, either via mail or in person.

For the November 3, 2020 General Election, in-person absentee voting will be available Friday, September 18 through Saturday, October 31.  You will complete an application for an absentee ballot at the office before you are allowed to vote.

For the City of Manassas, in-person absentee voting is located in the Old Town Hall building, 9025 Center St, from 8:30 am to 5:00 pm on weekdays (except federal holidays), beginning 45 days before each election (e.g., from September 18 through October 31 for the November 3, 2020 General Election).

In-person absentee voting will also be available from 9:00 am to 5:00 pm on the last Saturday before each primary and the last two Saturdays (October 24 and October 31) before the November 3, 2020 General Election.

For the City of Manassas Park, in-person absentee voting is available at City Hall, One Park Center Ct, at the same dates and times, except weekday hours are from 8:30 am to 4:30 pm.

The City of Manassas has six precincts starting in 2017, including a new precinct at Round Elementary School: 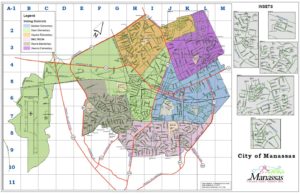 In March 2017, the Manassas Registrar of Voters mailed a letter to every registered voter in the City Manassas that indicates their current polling place..

Also starting in 2017, voting in the City of Manassas will be on paper ballots that will be scanned and recorded on new optical scanning machines.   Manassas Park has used this voting method for several years.

Virginia law requires all voters to provide an acceptable form of personal identification at the polls, such as a current Virginia Drivers License. View the list of acceptable forms of ID and bring your personal ID with you on Election Day. Voters arriving to the polls without an acceptable ID will be required to sign a statement affirming that they are indeed the registered voter.